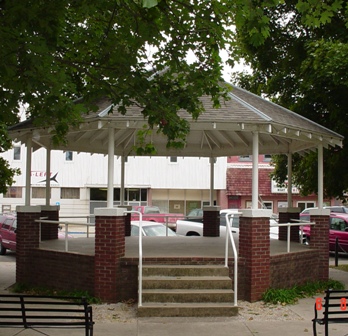 Bandstand Built in 1932 by the W.P.A. on the southwest corner of the square. When the new courthouse was completed in 1961, the county commissioners decided it didn't match the style of the new building, and they attempted to move the roof to a different structure in the West Park. The wind caught it as it was being loaded on to the truck, and it was demolished. The remaining brick stucture was left where it was. In 1996, the Chamber of Commerce Tourism Committee raised money to put a new roof back on the bandstand. A picture of the old roof was found at the historical society, and was used for a pattern.